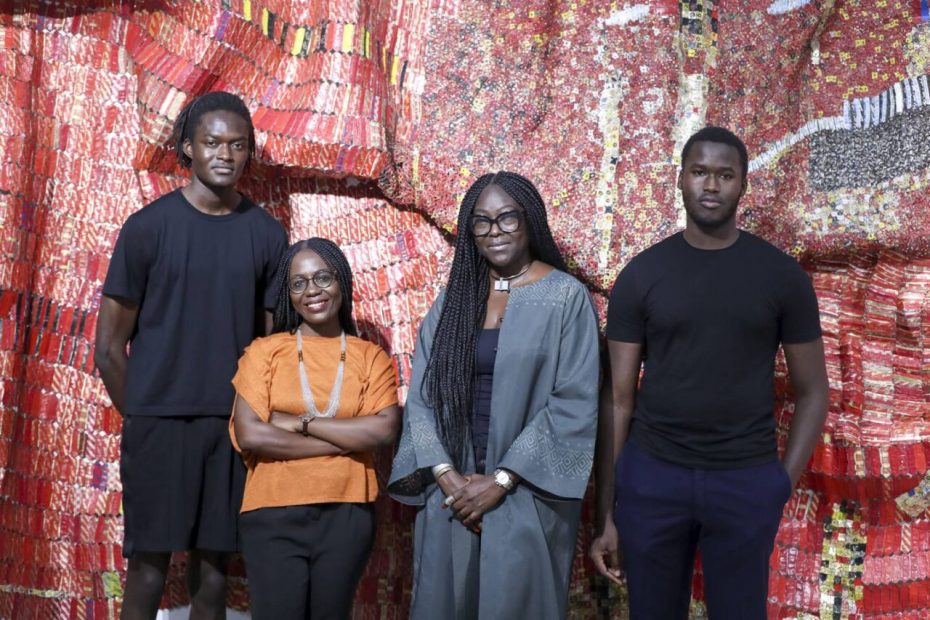 For its debut exhibition, Efie Gallery has pulled out all the stops. As part of its foray into the UAE art scene, the new arrival has brought in three new pieces and ongoing work by renowned artist El Anatsui, along with works by 20 contemporary artists from Africa and its diaspora.

It has also set up a pavilion at the Burj Plaza that has been specially designed by Ghanaian architect Alice Asafu-Adjaye for its launch last week, which coincided with the All Africa Festival in Downtown Dubai.

The pavilion is wrapped in a curving lattice made of wood and its interior galleries flow into each other. The design mirrors the exhibition’s theme of connections, highlighting the links between African artists across generations and the making of artistic ties between Africa and the region.

“We’ve connected revered and acclaimed artists with emerging and mid-career contemporary African artists,” says Afia Owusu-Afriyie, one of the gallery’s curators. In the show, Anatsui’s works are presented alongside other established names such as Ghanaian photographer James Barnor and painters Larry Otoo and Betty Acquah, as well as younger talents Yaw Owusu, Isshaq Ismail and Kojo Dwimoh, among others.

The highlight is undoubtedly Anatsui’s new body of work. Known for his assemblage sculptures made from bottle caps and wire, the artist, who is from Ghana and lives in Nigeria, has shown in major institutions in the region and across the world. In 2015, he was awarded the Golden Lion for Lifetime Achievement by the Venice Biennale. Previously, his work has been shown at the Sharjah Biennial and Guggenheim Abu Dhabi.

His 80-metre sculpture Detsi, vivid with deep reds and yellows, is an ongoing work that the artist began in 2008, while Silent One from 2021 is a black and gold piece that looks as slick and molten as oil. Striking in their colour and the fluidity of the metallic material, the works also contemplate the role of liquor, used as currency in the transatlantic slave trade, in linking Europe, Africa and North America.

Efie Gallery is also presenting one of the artist’s lesser-known wood panel sculptures from this year. Made by scorching varicoloured wood planks – a process employed by the artist to refer to brutal histories of colonial powers in Africa – the patterns on the work seem to spell out a genetic sequence, as the title DNA indicates.

A patron helped make the connection between the gallery and the artist, who agreed to present his works in the UAE, two of which are on loan from the artist’s estate and not for sale.

As for the decision to open Efie Gallery in Dubai, Owusu-Afriyie says the city was a fitting choice, not only because of its place as a global hub, but also because there was a gap in the market that needed filling.

“There isn’t a space that you can go to any day of the year to find African art. It’s always been come and go,” she says, referring to local art fairs that may draw in African galleries, but only happen once or twice a year.

“What we want to do is to have a permanent presence in Dubai representing contemporary African art,” she says. “It’s also about bridging the two regions, Africa and the Middle East.”

A few existing galleries in the UAE do feature African artists regularly, such as Mestaria, formerly Showcase, which has shown artists from Zimbabwe, Zambia and South Africa in addition to British and Arab artists. The Mojo Gallery in Al Quoz has presented artists from Senegal and Nigeria as well as those from the region.

But Efie Gallery hopes to carve out its own space with a programme that specialises in African artists from the continent and the diaspora, with an emphasis on West African art. The intention is to start in Dubai, with the gallery planning to open its permanent physical space at the start of 2022, before eventually expanding to London and Accra.

ts first show, which runs until Monday, November 8, leans heavily on Ghanaian artists, reflecting the roots of its founders, including Valentina Mintah, a Ghanaian-British technology executive who sits on the executive board of the International Chamber of Commerce.

Valentina, who has lived in the UAE for four years, founded the gallery with her sons Kobi Mintah, a photographer and filmmaker whose works are also in the current exhibition, and Kwame Nsiah Adomako Mintah, a young art collector and university student. Both are also involved as curators of the gallery, helping secure some of the works in the show.

Kwame explains that the gallery’s goals are to broaden notions around what constitutes African art and also to ensure its longevity. “When people think of African art, they think of masks or traditional works. Going forward, we want to change the perception of what African art could be,” he says.

“African contemporary art today is almost becoming a trend. People are buying works and then they go to auction in the same year, so [they’re] flipping them with great success,” he says. “We don’t want to see African art die with the trend. We want to protect African art and make sure that it’s here to stay.”

Valentina agrees. “We don’t want African art to be an afterthought. We want it to blossom with the art scene here,” she says, adding that the nascence of the local art market means there’s more room to grow. “The UAE presents a very good opportunity. If you go to cities like London, it’s very difficult to innovate.”

She says that Efie Gallery is also challenging narratives around African art and art history to audiences. “Until recently, African art was almost seen as a charity. We want to show art not just as a charitable gesture. Yes, that might exist as arts and crafts, but we want to change the stereotype.”

Even the concept of the show, placing older artists side by side with newer ones, is an attempt to draw a continuous line through artistic production in Africa and its diaspora over generations.

“African art has existed like any other in more mature markets. While the art scene in the West was developing, so it was in Africa, too, but it was not amplified or celebrated by the media. Because there was a vacuum, stereotypes grow,” Valentina says.

As part of its programming, Efie Gallery also intends on participating at Art Dubai next year and is now preparing a solo exhibition of an African artist living in Dubai.

Efie Gallery’s debut exhibition is on view at Burj Plaza, Downtown Dubai until November 8. More information is available at efiegallery.com