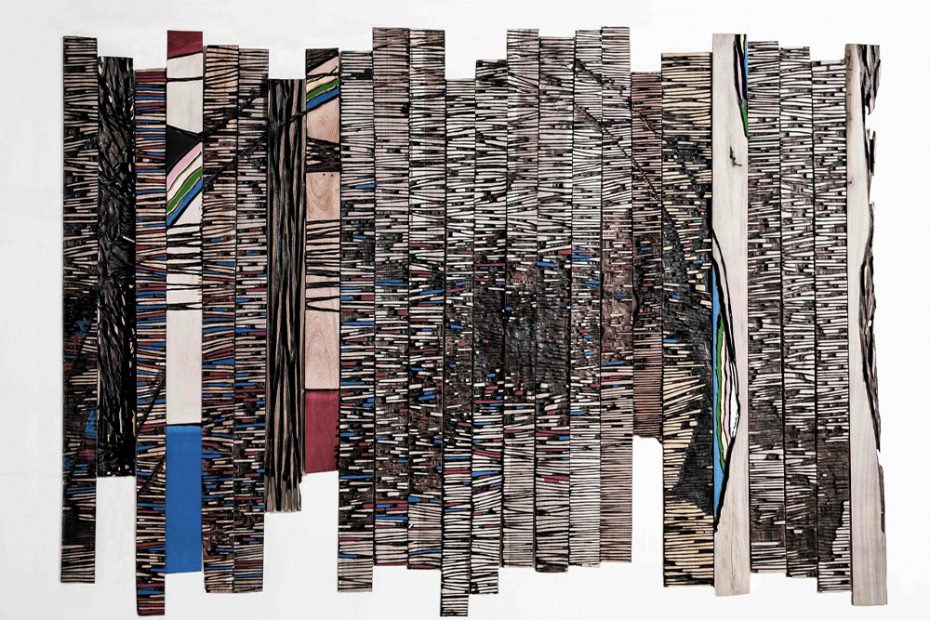 Efiɛ Gallery will launch their new permanent Dubai gallery space in the Al Quoz Creative Zone on Tuesday 8th March 2022, with a major solo exhibition, titled Shard Song, of works from renowned contemporary artist, El Anatsui curated by Mae-Ling Lokko and creatively directed by Aida Muluneh. The exhibition presents a series of new wooden sculptures that recall Anatsui’s earlier practice in this medium and its continued evolution, complimented by a range of signature bottle cap works. Co-founded by Kobi Mintah, Kwame Mintah, and Ms. Valentina Mintah, Efiɛ Gallery is a contemporary art gallery specialising in the promotion of African artists from within the continent and the diaspora, with a focus on West African art. The gallery represents both mid-career and established artists and supports the sharing of their works in the Middle East, creating a platform for collaboration and exchange between the two regions.

“The term ‘shard’ goes back to the fundamental unit in El Anatsui’s work – the broken fragment of the ceramic pot, the bit, or piece –that has undergone a process of rupture and division. But “shard” here, communicates the quality and potential of the broken piece – of something that’s edges are left bare; exposed but ultimately, ‘free’. Shard also brings with it a degree of lifeforce within the small-scale of the fragment”, said Lokko. Expanding on the theme Lokko explains further that “The idea of the ‘song’ belonging to the shard, gives the shard agency. It also taps into the dynamism and movement that has evolved in the iterative process of the wood carvings. What emerges is an almost-musical quality to the wood panels’ pattern of carving and notes of color. There is a fluidity in the chaos, and visibility of force that propels the small scale carvings across the wood panels. I felt the word ‘song’ brings it together in an intimate, personal way, communicating the joy, and liberatory notes in the works. The idea that “each shard has its own song” gives dignity and a unique power to each, but ‘song’ still can also be taken to mean the whole, cumulative impact of many individual shard songs.” In October 2021, Efiɛ Gallery made their Dubai debut with a pop-up pavilion exhibition in Burj Plaza, forming part of the All Africa Festival, and providing a highly acclaimed preview of the gallery’s longer-term plans for Dubai and the region. Now with its new and permanent exhibition space, Efiɛ Gallery is the new addition to the Al Khayat Art Avenue in Dubai’s Al Quoz Creative Zone. Efiɛ Gallery is one of the first movers to secure permanent gallery space in the new Al Khayat Art Avenue – an exciting new cultural destination and an integral new development within the expanding Al Quoz Arts District. The gallery space is 3000sqm of open exhibition space. A mezzanine hosts an artist’s studio for residency programmes catering for both the gallery’s artists and local artists; creating a unique platform for collaboration and exchange between the two regions, as well as a record gallery which will exhibit rare and important vinyl records from around the world. Through the exhibition of records, the gallery seeks to highlight the intersection of art and music, ultimately allowing for a holistic celebration of the Arts.

El Anatsui was born in Ghana in 1944 and currently lives and works between his two studios in Ghana and Nigeria. His work straddles the traditions and heritage of the country of his birth, the country of his residence and career for many years and his interactions with the world at large. Even though he is famous globally for his metal works made up of used bottle caps, parts of tin cans and other metallic objects connected to each other with copper wire, Anatsui is the consummate artist transforming other mediums like paper, wood, other metals into various expressions of art. As his metal sculptures challenge traditional views of sculpture as rigid and insistent, conversely his wood works challenge opinions of mediums like wood being restricted by their rigidity to evoking poetry in the ease of motion and flexibility in the hands of sculptors. He is known for his position on art as fluid and an ever changing form. Currently the most visible artist to have emerged from the 1970s art movement Nsukka Group and a trail blazing contemporary artist of his time, his ethos having evolved over time, originated from using materials from his environment speaking to his heritage as an African rather than foreign mediums. Regarding his iconic material, the aluminium bottle caps which he discovered during a walk; a material whose flexibility sparked his imagination even though it was not original to his environment as his previous canvas of wood. Yet this same simple material that was making a deep impact on his environment would make a deep impact through art by being transformed into stunning works of his imagination and reduce its impact on the environment. Julian Lucas of the New Yorker aptly described the process as the ‘Trash to Treasure novelty’ Anatsui’s generosity in giving creative freedom in the installation of his metal works is also present in the presentation of his woodworks where he encourages the re-arrangement of the panels as led by the custodian at the time. This is a nod to his words captured during an interview with Art Basel in 2019 “The golden rule is there are no rules…. As an artist, your worth is determined by how you can operate without rules”. In so doing, he subtly confers the title of artist to art handlers, collectors, curators, institutions and ultimately his captive audience. His recent accolades include Japan’s 2017 Praemium Imperiale International Arts Award, described as one of the art world’s highest awards, the Golden Lion award for Lifetime Achievement of the 56th Venice Biennale in 2015 and a Fellow of both the PanAfrican Survey of Artists and the Forum for African Artists.

Having held over 80 solo exhibitions worldwide to his credit, his works are in collections of major art institutions, international museums, globally recognised art galleries and auction houses, as well as corporate and individual art collectors. He participated in the Venice Biennale in 1990, 2007 and exhibited in the landmark inaugural Ghana pavilion in 2019. His work has achieved seven figures at auction and belongs in the collections of the National Museum of African Art, the Museum of Modern Art, the Metropolitan Museum of Art, the Vatican, British Museum, de Young Museum, Paris’s Centre Pompidou to name a few. A celebrated professor with a 40 year plus career in fine and applied arts, and an acclaimed Page 3 of 5 alchemic practitioner in the world of art who has and continues to influence and inspire generations of artists across borders, one might dare to suggest that El Anatsui is a modern day quintessential polymath.