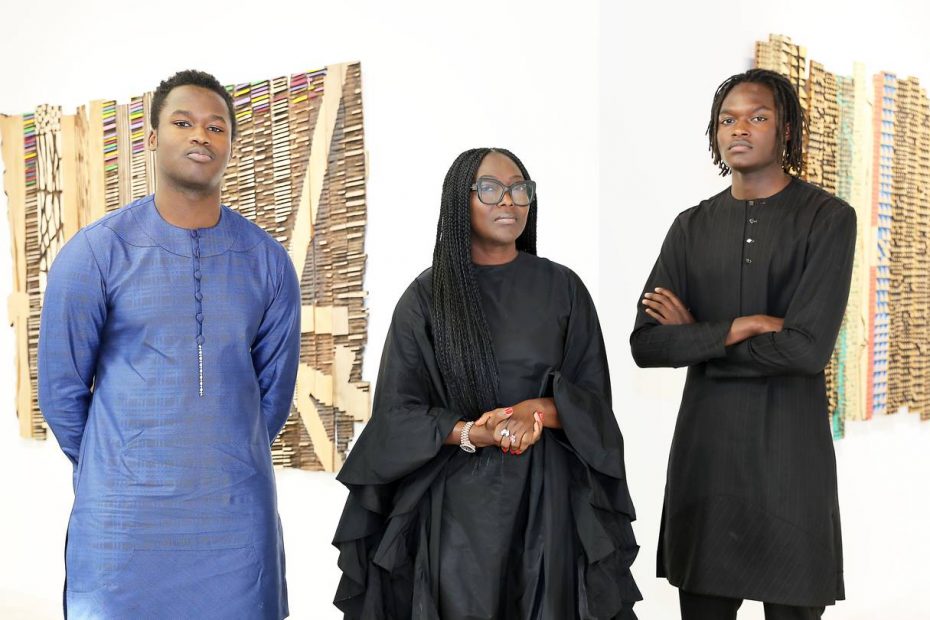 Efie Gallery began as a participant in last year’s All Africa Festival, setting up a temporary pavilion at Burj Plaza in downtown Dubai to showcase works by African painters and sculptors, including the acclaimed El Anatsui.

The gallery’s entry into the UAE arts network with a permanent space on Al Quoz’s Al Khayat Art Avenue is part of a larger push by Dubai Culture to grow and nurture the creative industries, fueled in large part by the announcement of the Al Quoz Creative Zone in April 2021

The zone is intended to be a hub for companies active in the visual arts, cinema, music and heritage sectors and encompasses an area dominated by industrial operations. Currently, the typical Al Quoz tenants, auto repair shops and companies that use warehouses for storage are being squeezed out of the neighborhood to make way for cultural businesses.

The location of the Efie Gallery, Al Khayat Art Avenue, is just the beginning of a newly developed neighborhood around the Al Quoz industrial area. Modeled on neighboring Alserkal Avenue, Al Khayat Art Avenue transforms a cluster of warehouses into white cube galleries and other art spaces.

A number of galleries, including a photo studio, will open on the new avenue in the coming months.

Valentina, who is Ghanaian-British, is a technology executive who saw a gap in the regional African art market. Speak with The National in October she said: “We don’t want African art to be an afterthought. We want the art scene to flourish here.”

The creation of the Efie Gallery is part of this mission, which includes highlighting not only current artistic production in Africa but also its rich history.

Curated by Mae-Ling Lokko, an artist and educator at Yale University, Shard Song features a total of seven works, some of which present new elements in the artist’s practice.

This includes the introduction of shades of purple and pink, as seen in his 2022 sculptures rainbow colors and keyboard for life. Anatsui is often known for using reds and yellows that borrow from traditional Ghanaian kente cloth.

After the outbreak of the coronavirus pandemic, the artist has settled in his native Ghana, although he previously worked in his studio in Nigeria. This move influenced Anatsui’s use of materials, particularly the difference between the hardwoods available in the two countries. Wood from Nsukka is typically inherently red, yellow and white, but Ghanaian hardwood has lighter shades of yellow that allow the artist to play more with pigments.

In these sculptures, made with the help of assistants who singe the boards to leave patterned impressions and scars, Anatsui alludes to the brutal colonial history on the African continent.

Shard Song also features three hanging metal sculptures, including a re-hanging childrenshown last year in the gallery’s temporary pavilion, as well as new works from 2022, profile of a country and prodigal sonwhich will be shown publicly for the first time.

Shaped like a landmass, though an unrecognizable one, profile of a country consists of white and green medical bottle caps and is sewn together with wire. On one side, modules of blue, yellow, and white flattened snap caps seem to intrude into the white form.

In addition to fine art, the gallery is also dedicated to promoting music, especially old, rare and hard-to-find albums that may only exist on vinyl. Consequently, the second floor of the space houses Efie’s Record Gallery, which is currently showing a curated selection of records from Kobi and Kwame’s personal collection.

The brothers have been collecting records for two years and have managed to find rare albums on their travels around the world. Among them is an extremely rare record Prince of Space / Dance of the Void from 1959 by Charles Wilp with artist Yves Klein. It is a silent record that emulates Klein’s minimalist visual work.

“We were interested in this connection between music and art,” says Kobi, also saying that the gallery intends to promote many artistic disciplines.

“I realized there was a world of music that only existed on vinyl,” says Kwame, explaining that vinyl represents a convergence of sonic and visual elements with the cover design and meaning of the production.

The brothers also collect records of historical importance, including a disc of the speeches of Ghanaian nationalist leader Kwame Nkrumah entitled Africa speaks to the world. “Our story is very oratorical, and a lot of it is passed down through song and other oral traditions,” says Kobi.

Like fine art, vinyl also has the allure of scarcity and tangibility in an industry dominated by streaming services. “It’s a tangible ownership of the work,” says Kobi. “There’s also this idea of ​​passing it on from one owner to the next. It is about the negotiation between collectors. Many collectors remember where and from whom they got their records. There is a connection to the music and to the object.”

While the albums from the brothers’ collection are not for sale, a selection of other works are available in the gallery. Additionally, Kobi and Kwame intend to invite other vinyl collectors to showcase their albums in the space.