Home » News » How African art is coming of age in Dubai

How African art is coming of age in Dubai 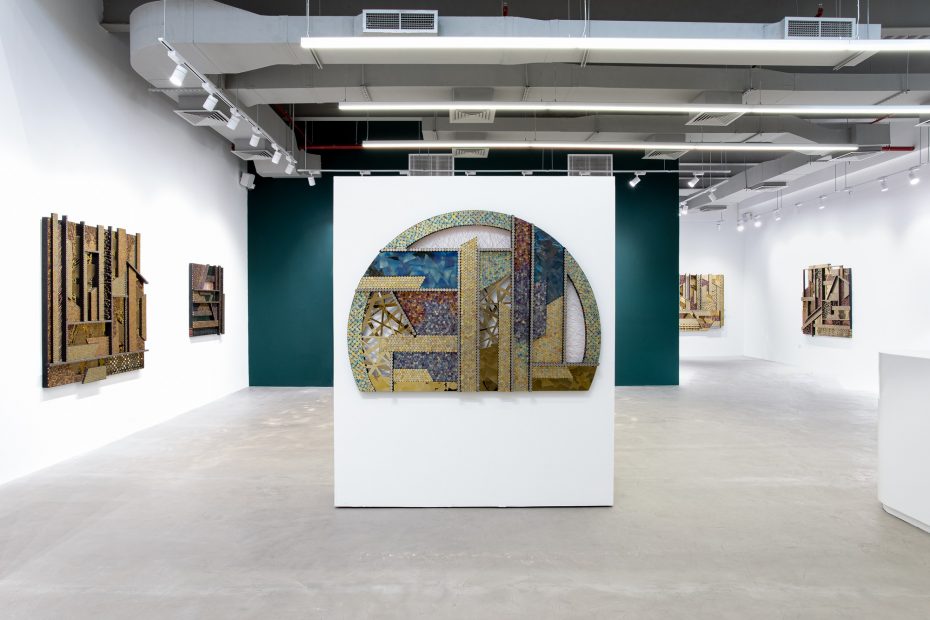 African art is coming of age in Dubai as galleries such as Efie Gallery are showcasing contemporary artists from the continent.

Ghanaian artist Yaw Owusu’s works are on display — his first solo exhibition in the Middle East called In the Cool of the Day — at the gallery till December 20.

London-based art adviser and curator Kami Gahiga has put together the exhibition, which displays 10 new works developed during the artist’s residency with Efie Gallery in Dubai in July.

Gahiga, a member of The Baer Faxt Art Advisory, provides bespoke art advisory services to private collectors, companies and institutions and is the recipient of a First Distinction Art Business master’s degree from the Sotheby’s Institute of Art in London, and is one of the brains behind introducing Owusu to Dubai and the Middle East

“My time at the residency in Dubai set the premise to encounter the fascinating culture and history of the UAE. Far beyond the textual and media description of the place, the encounters and visits to the cultural institutions, I was also inspired by Dr Yousif’s wisdom as I spent a lot of time with him.

“The period unveiled to me a journey of revelation of the identity of the people and their culture. These revelations inspired my process and thought, as well as the new forms that were realised during the residency. The works which were made during this period moved from the extravagance and materiality of my initial assumptions, into a more detailed depiction of historical references of architectural forms, trade and exchange along the Arabian Gulf, and religious and cultural interconnectivity.

“The works became more about the people, their history and culture, and how they responded to their land, much more than a prosaic representation of beauty and opulence,” he says.

Coin is an integral part of Owusu’s artistic expression.

“The use of coins in my work, particularly the least denominations, references the basic form of value. By juxtaposing these denominations from Ghana, the US and the UAE, I subject my relationship and understanding of value into critical query. The coins, which are mostly least valued or barely used, become new catalysts to delve into the economic and political dynamics of these places. Since these are objects through which trade and exchange is established, I use them together to reflect the complexity of global economic dialogues around labour and distribution of wealth in contemporary reality, as well as the bridge between symbolism and meaning. Money or currency itself is metal, paper, and in recent times plastic, my work questions the point at which they become valuable or not. I’m interested in the role places play on the objects as well. By moving Ghana pesewas and US pennies physically to the UAE, what does it become? Similarly, what happens when the UAE fils leave for another place? These questions about the power of place and the relationship to materiality and value fascinate me and influence my creations,” he says.

He used different currencies to provoke conversation around the shifting and transient nature of value across diverse economic and cultural contexts.

For instance, in 2007, Owusu’s native Ghana introduced a new denomination to curb its growing inflation at the time and also as part of the celebration of the country’s 50th independence from colonisation. The least known denomination, 1 pesewa, soon after its introduction, lost its value and fungibility.

“The currency, which is produced by the Royal Canadian Mint, became objects through which I could question our economic and political independence. The basic fact that an independent country doesn’t mint or produce its own money provoked my work. The US penny, on the other hand, suffers a similar phenomenon of use and value as well. Interestingly, it bears the portrait of American President Abraham Lincoln, which references the abolition of slavery and slave trade in the US in the late 19th century. By using these formerly 100 per cent copper coins, but now 97.5 per cent zinc and 2.5 per cent copper plated coins, all faced up with the portrait, I subject the realities of the emancipation in recent times to question labour and reward, equality and respect in the socio-economic and political context of America,” he adds.

Some of his works such as Power of Imagination, Golden Hour, To Believe, Something From Nothing and Infinity came to fruition before his residency in Dubai.

“I based my imagination on the beauty and ambition of the UAE in building such a beautiful nation. My works celebrate the undeniable wit and intention of a place with endless possibilities, wealth, and opulence. To build a country with such grandeur and extravagance, I can only appreciate the beauty of hope and ambition. These works, both in their composition, colour palette and form, reflect nothing but a beauty that the UAE embodies. The encounters shared with Emiratis, and the visits to cultural sites and museums during my time at the residency, revealed the people, the culture and history beyond the newly-built cities. And these informed my latest creations such as Going with the Wind, Singing Dunes, In the Cool of Day and Morning Sun,” he says.

Owusu’s creation Heart of a Place embodies the journey in conceiving his solo exhibition in the region.

“It encapsulates all the elements, from my initial imagination, the encounters in the UAE and everything in between. It celebrates the UAE in all its grand scale and dynamism, wealth in culture, people and the place. The work, which spreads 16-feet wide and 8-feet high, carries the presence and respect of the people and their capacity, while opening up invitations to the realities of the place beyond imaginable boundaries. In this piece, I explored architectural forms from historic to new technological advancement, as well as texture. The land itself is reflected in the tone and warmth of the palette while presenting cultural elements through motives and form. In the end, it is nothing but a true reflection of the past, now and the future of the soul of this place and its people,” he adds.

Credit: How African art is coming of age in Dubai – News | Khaleej Times