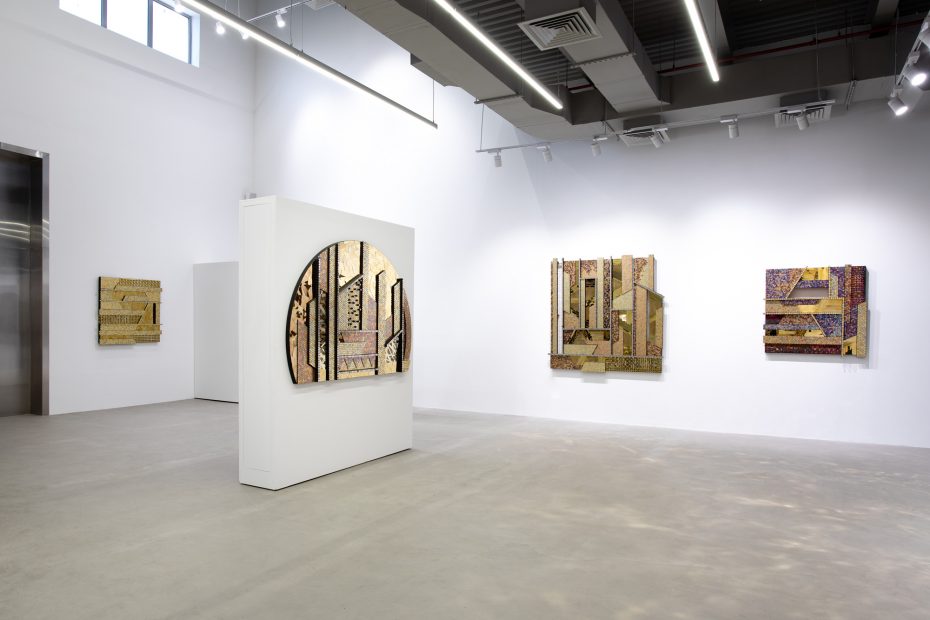 Long, differently sized vertical strips of shiny metal placed together in unison on a long rectangular plane pulsate and glimmer. The light they emanate is alluring and captivating as are the various geometrical shapes that proliferate the surface of what is one of Ghanaian artist Yaw Owusu’s latest works: “Heart of a Place.” The work, made of numerous coins – UAE fils, US pennies and Ghanaian pesewas – and placed on stainless steel and wood with copper wire, is displayed prominently on a central wall space in Efie Gallery in Dubai. Shown as part of Owusu’s first solo exhibition with the gallery and in Dubai called In the Cool of the Day, the work, a central piece of the show, at first appears merely decorative with its rich incorporation of shiny coins and metal – the ideal work to place within a home where it will immediately illuminate its surroundings. But upon closer inspection it sheds light on the distinctive cultural qualities of the Emirates while embodying the artist’s ability to transform otherwise worthless objects – coins from the US, UAE and Ghana – into striking works of art laden with meaning and value.

“These works are an extension of my work exploring ideas of value and ideas inherent in the type of material used,” explains Owusu, emphasizing how whether this entails his use of US pennies, UAE fils or Ghanaian pesewas or a mixture of all three as can be found in his current show, Owusu’s goal is to have the viewer question the material in which these coins and his installations are made and how they point to larger legacies of global colonial trade.

“Even from my studio in New York when you look out at the beautiful sky you start seeing these fabrications of steel, which means a new building is coming up,” he says. “These new buildings will result in changes in the demographics of neighborhoods and communities. I’ve been influenced by this kind of rapid development or change of society.”

As Owusu shows, in this new body of work, such changes are synonymous with the materials representative of those changes: steel, coins and copper. And they are materials found all over the world—from Accra to Dubai that illustrate the rapid transformations of societies from the time of the age of exploration to the present.

“I am now using steel and copper to show how these simple materials are extracted and transformed into currency,” says Owusu.

For close to a decade Owusu, based between Accra and New York, has appropriated old objects of value in his artwork and reappropriated them with new purpose and meaning. His jewel-like sculptural installations could easily be mistaken for jewels—their shiny textures easily transfix and lure the spectator in until they realize that the mission of the artist’s work is to delve into the complex realities to current politics and socio economics after centuries of colonialism and global trade.

A signature material of his work is the Ghanaian “pesewa” coin. These now worthless pennies, which can be hardly sourced apart from the Central Bank of Ghana, the only bank to distribute the pesewa, illustrate the economic changes in Ghana. They were first introduced in 2007 during a period of inflation in Ghana, yet now have no value as the country continues to struggle with inflation, which hit a new 21-year high of 50.3 percent in November 2022, according to Reuters.

Yet Owusu sees the pesewa coins, like he does the US pennies that he has incorporated in his work since moving to New York in 2020 to pursue a Master’s in Fine Art at Pratt Institute of Art, in a similar light – as representative of the effects of trade across the centuries. He obtained his Bachelor’s in Fine Art in Painting from Kwane Nkrumah University of Science and Technology in Kumasi in 2015. Owusu has presented his work in Africa, the United States and the UK, with notable shows, including his solo exhibition “Limitless Growth, Limited World” at the Institute of Contemporary Art in San Diego, California in 2022; Reflections from The (In)Visible Past at Gallery 1957 in London in 2021 and the group exhibition Chromotherapy in an Age of Doubt at Pratt Manhattan Gallery in New York in 2022, among many others.

The works on display in Efie Gallery were developed during Owusu’s residency in Dubai during the summer of 2022. His new work, while continuing his signature incorporation of coins and found objects, has noticeable Arab characteristics such as arabesque design notes, forms akin to those of pointed Arabic windows and mashrabiya (an oriel window with carved wood latticework) – references within his geometric abstract sculptural installations.

The works, which scintillate before one’s eyes, luring them into states of calm and enthusiasm, are linked in this show on a global level through the nearly worthless coins from the UAE, US and Ghana as if to show how the network of trade and exploration that developed so long ago still stays with us, shapes us, our business and human interaction.

Works in the show such as Power of Imagination, Golden Hour, To Believe, Something from Nothing and Infinity a depictive of the artist’s early perception of Dubai as a place of wealth, endless possibility and futuristic architecture. While other works such as Going with the Wind, Singing Dunes, In the Cool of Day and Morning Sun capture the artist’s experiences in Dubai of the desert and of local culture, history and ways of life.

Owusu’s work pushes us, the viewer, to delve deep into history and its effects on the present systems that be, that remain. And he does so through works that are so breathtaking and engaging it is nearly impossible to look away. But the artist hopes, more than just mere objects of beauty, that they will cause one to reflect on greater causes pivotal to human equality and progress.